From Push to Pull

1. From Push to Pull
2. How ORBIT Works
3. Generate Brand Gravity

To build engagement in the Digital Age, shift your marketing mindset from push to pull.

Where traditional companies push out messages and products, today’s most successful brands pull customers in.

Instead of treating customers as passive targets, see them as active participants in a Shared Purpose.

From monologue to conversation

In yesterday’s one-to-many world, companies did all the talking.

Before the Internet, all media—books, radio, television, film, magazines and newspapers—were all one-to-many.

The same message went in one direction only: out. Messages were directed at a passive and anonymous audience.

The publisher didn’t know you were reading the morning newspaper. When you talked back at the TV, the newscasters couldn’t hear you.

In yesterday's one-to-many world, everyone was a consumer—of information, entertainment, products and services.

When the Internet came along, everyone became a broadcaster. Audiences were no longer passive. Suddenly, you could comment on a news story—or write your own.

Now, people can talk to each other in the same channels that brands are using to push their messages. Audiences have become communities. The Internet is full of people making connections and exchanging value.

A new mindset for marketing

In the Digital Age, it's hard to differentiate when everyone is shouting louder than ever.

Digital communication has brought about the proliferation of channels, the fragmentation of audiences, and the rising importance of influencers, peer reviews, and word of mouth.

Add to this the devaluation of brands and the increased commodification of products through the rise of online platforms like Amazon, where people will choose a brand they’ve never heard of with 1,000 five-star reviews over a known brand with no reviews.

All of this makes it harder and harder for brands with a traditional marketing mindset to cut through the noise of the marketplace. The result? Declining loyalty and a lack of differentiation.

From purchase to purpose

Today’s most successful brands differentiate through relationships based on connection with a larger purpose. 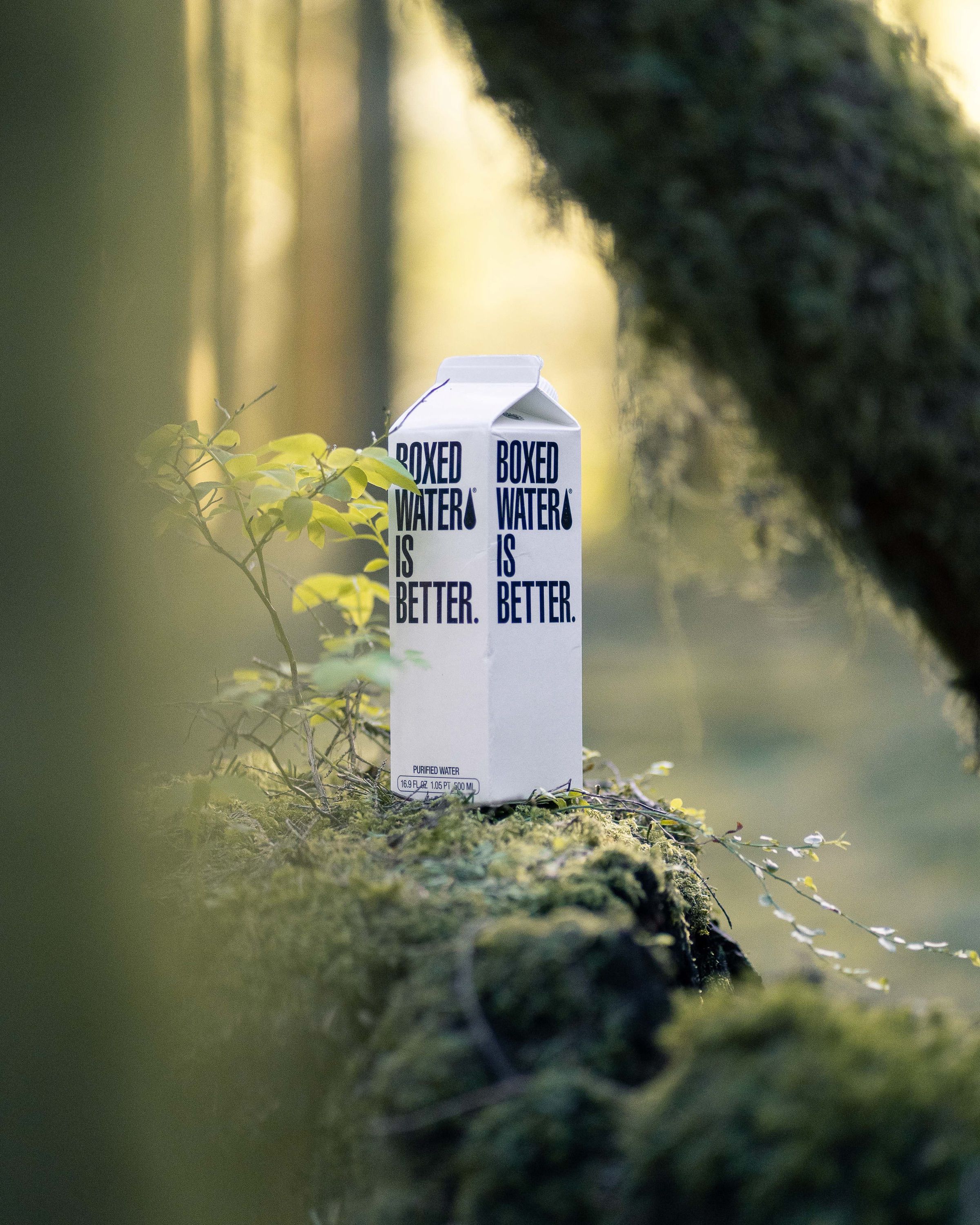 “Boxed Water is Better” focuses on reducing the environmental impact of packaged water.

The current focus on customer experience often doesn't generate the kind of loyalty and differentiation companies are looking for—because they’re still focused on transactions rather than relationship.

The reality is that relationship between people and brands takes place in a much larger social and relational context than many companies realize. Given comparable options, customers will choose a  brand they feel a connection with through Shared Purpose.

Brands with ORBIT are focusing less on "path to purchase" and more on Path to Purpose.

All of this makes it harder and harder for brands with a traditional marketing mindset to cut through the noise of the marketplace. The result? Declining loyalty and a lack of differentiation.

In the evolution of its brand message, the makeup retailer Sephora illustrates the elevation in thinking from transaction to relationship, and from purchase to purpose.

In an early incarnation, Sephora positioned itself as “The Beauty Authority,” focusing on its expertise in helping customers purchase and use makeup.

Then it became "Transforming Beauty” and “Beauty Together,” which brought Sephora and its customers together in a movement about beauty.

Most recently, its message is “Be Fearless,” which expands the Shared Purpose beyond beauty into a courageous way of being in the world.

Nursing scrubs are the kind of product you might think would be difficult to differentiate. But Cherokee Uniforms shows how to build differentiation by focusing on purpose beyond their products.

Cherokee Uniforms celebrates the tremendous contributions healthcare workers make to society, saying its goal is to be their champion.

It funds scholarships for nurses, recognizes exceptional nurses and funded a documentary aimed at reducing burnout among nurses.

Cherokee creates a strong relationship with its customers around the Shared Purpose of appreciating and supporting nurses' success and wellbeing.

To create engagement in a many-to-many world, find ways to enable and empower connections between customers.

Most companies focus on communicating to persuade customers and promote products. This is the monologue mindset behind push marketing.

Some companies have even begun to listen and learn from the market.

But today, the most important influence is what people say to each other—how your customers connect and collaborate with each other.

To create engagement in a many-to-many world, find ways to enable and empower connections between customers. 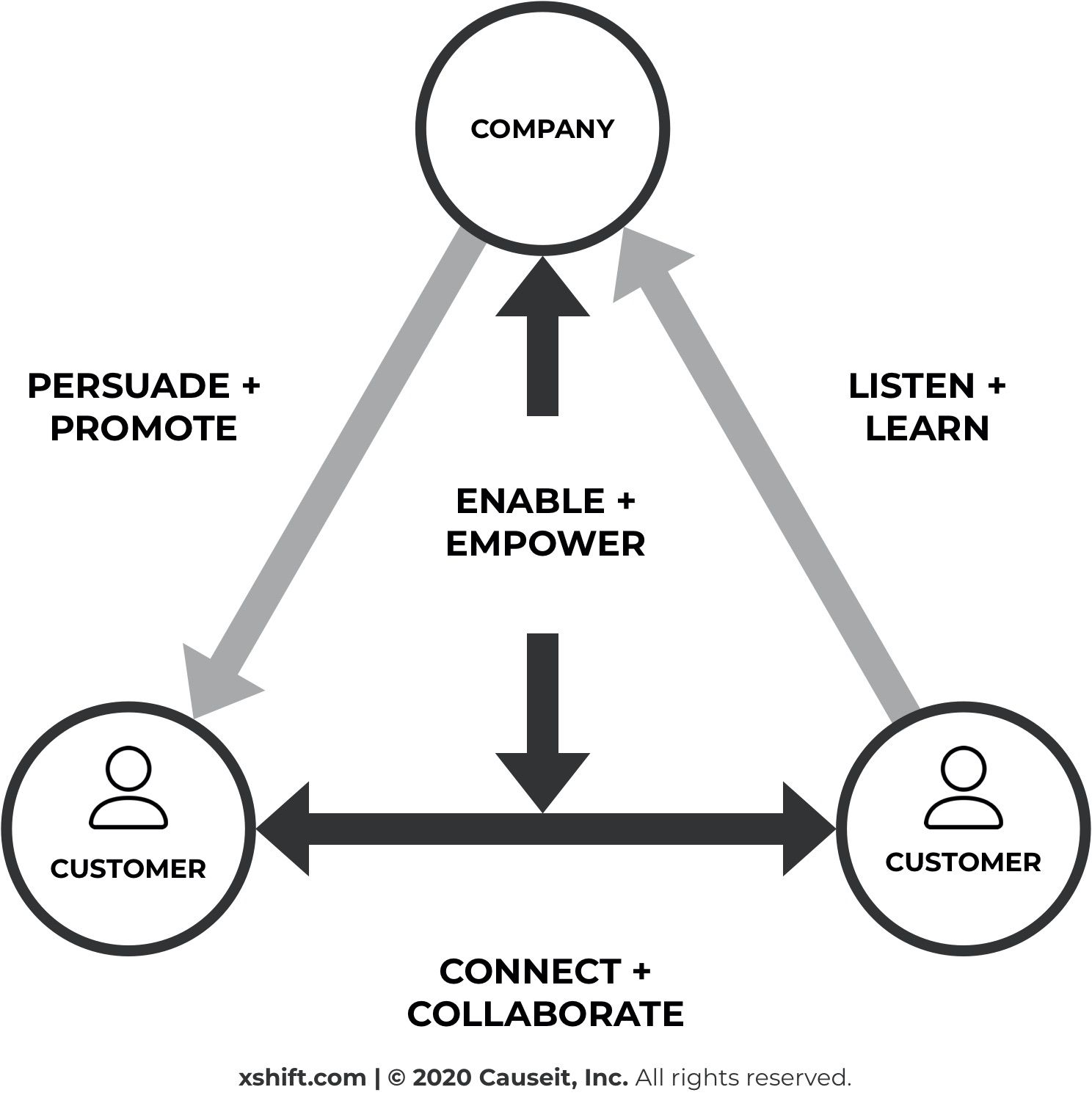 Traditional marketing is based on pushing information out.

Marketers segment
and target audiences,
sending messages
through channels
with campaigns
to move consumers
through stages
of a funnel.

The language and the thinking here is linear, transactional and one-directional.

The shift to pull

Technology is changing the nature of relationships, and brands need to pay attention.

It used to be that companies had to promote themselves by pushing information out so that people knew who they were, what they sold and why to buy from them.

But in the Digital Age, people can find this information on their own. So companies don't need to be as pushy as before.

Today's marketing is more a matter of attraction, of pulling people in towards brands and organizations.

Creating the kind of gravitational field that pulls people in and inspires engagement, trust and participation is a crucial challenge for leaders in the 21st century. 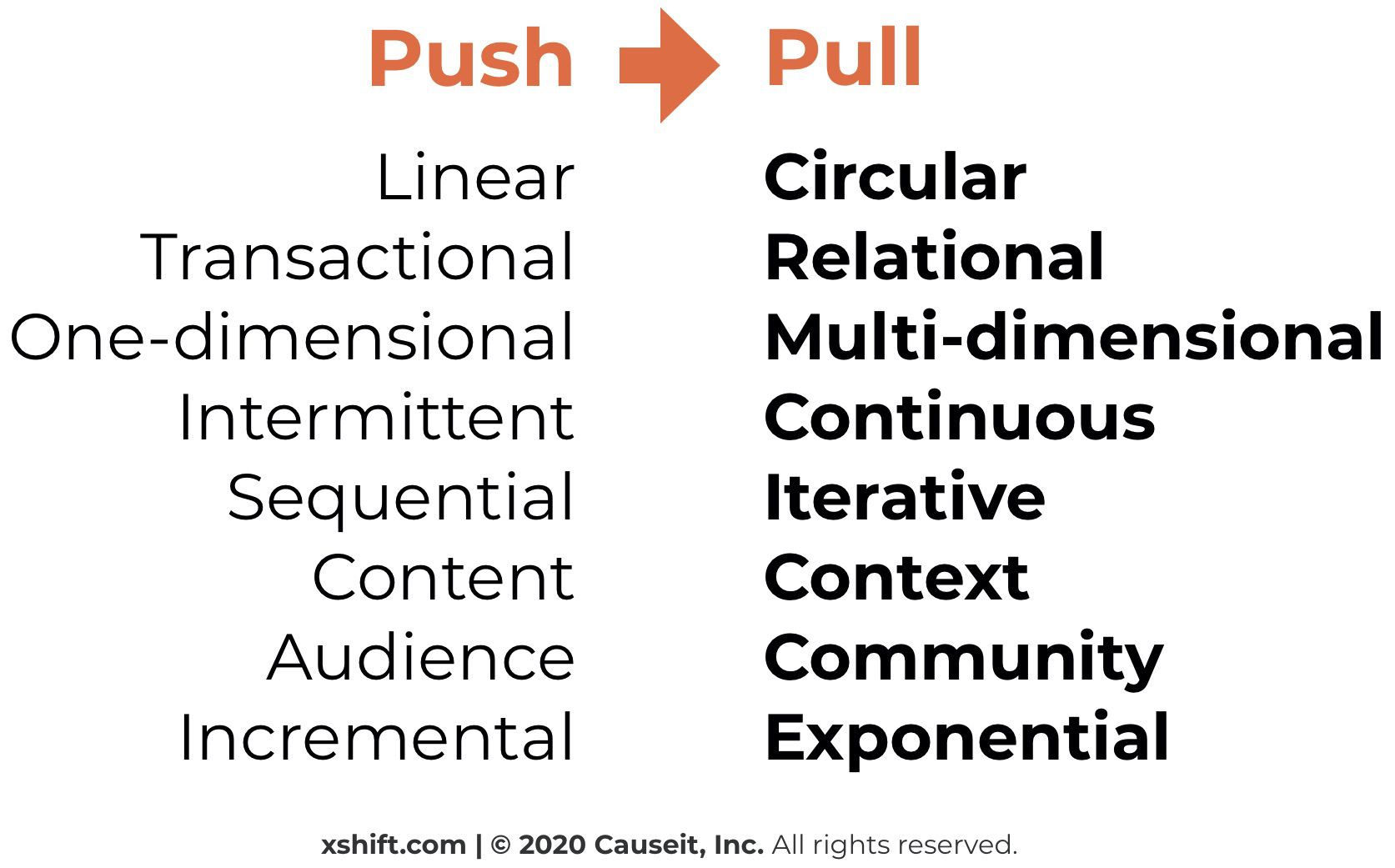 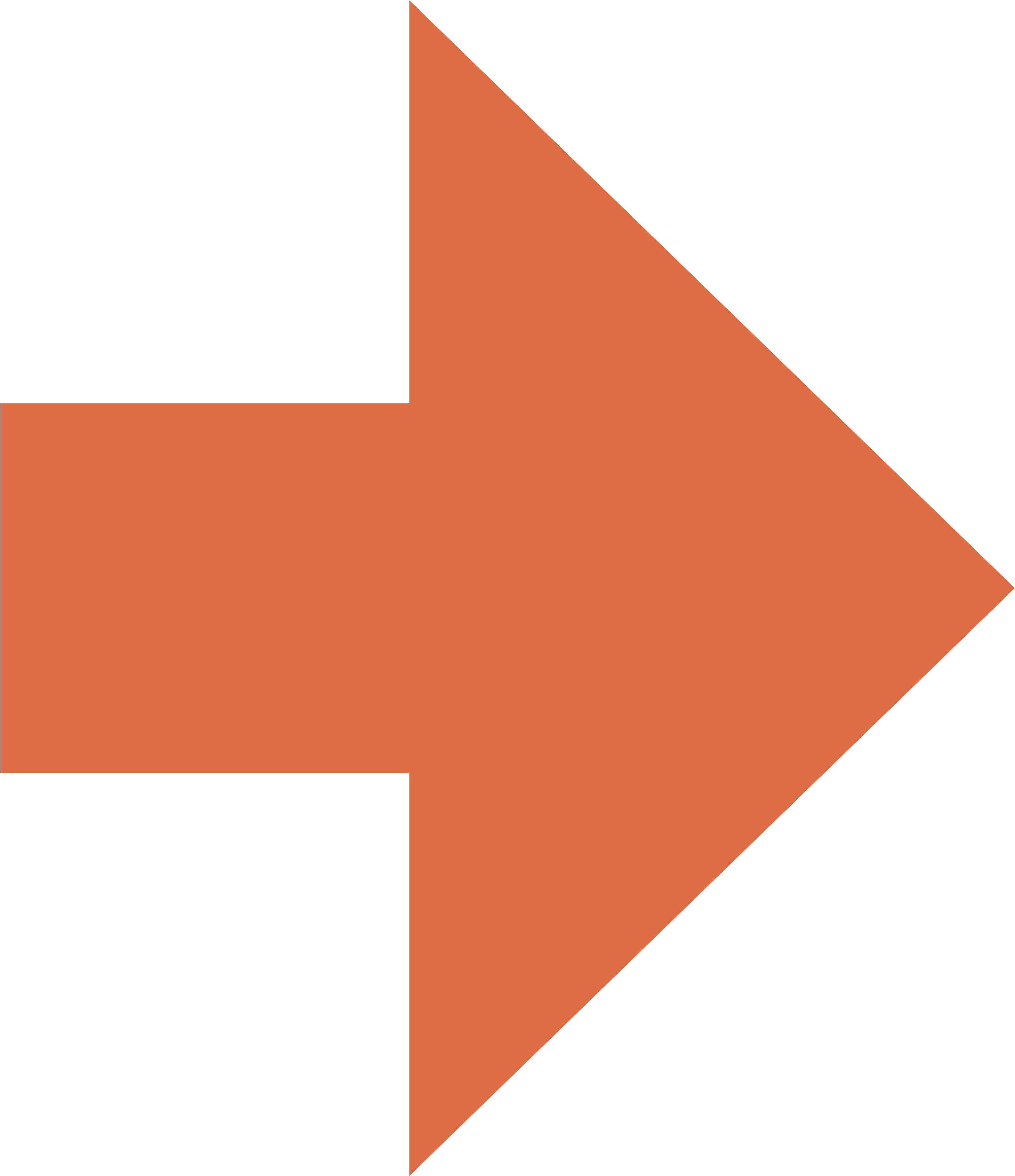 To pull people in, embed transactions inside relationships.

Use relationships to drive transactions

The language and mindset of push brands is
linear, transactional and one-directional.

The language and mindset of pull brands is
exponential, reciprocal and multi-directional.

with reciprocity and trust

‍We often talk about a customer’s relationship with a brand. Instead, think of the brand itself as a relationship.

The default brand relationship is Producer:Consumer or Buyer:Seller. These relationships are one-directional and asymmetrical. The company produces the product or service, and the customer consumes it.

Today’s brand innovators are creating relationships beyond Buyer:Seller—ones that are more collaborative and reciprocal.

All these relationships are more reciprocal, symmetrical and personal than Producer:Consumer. 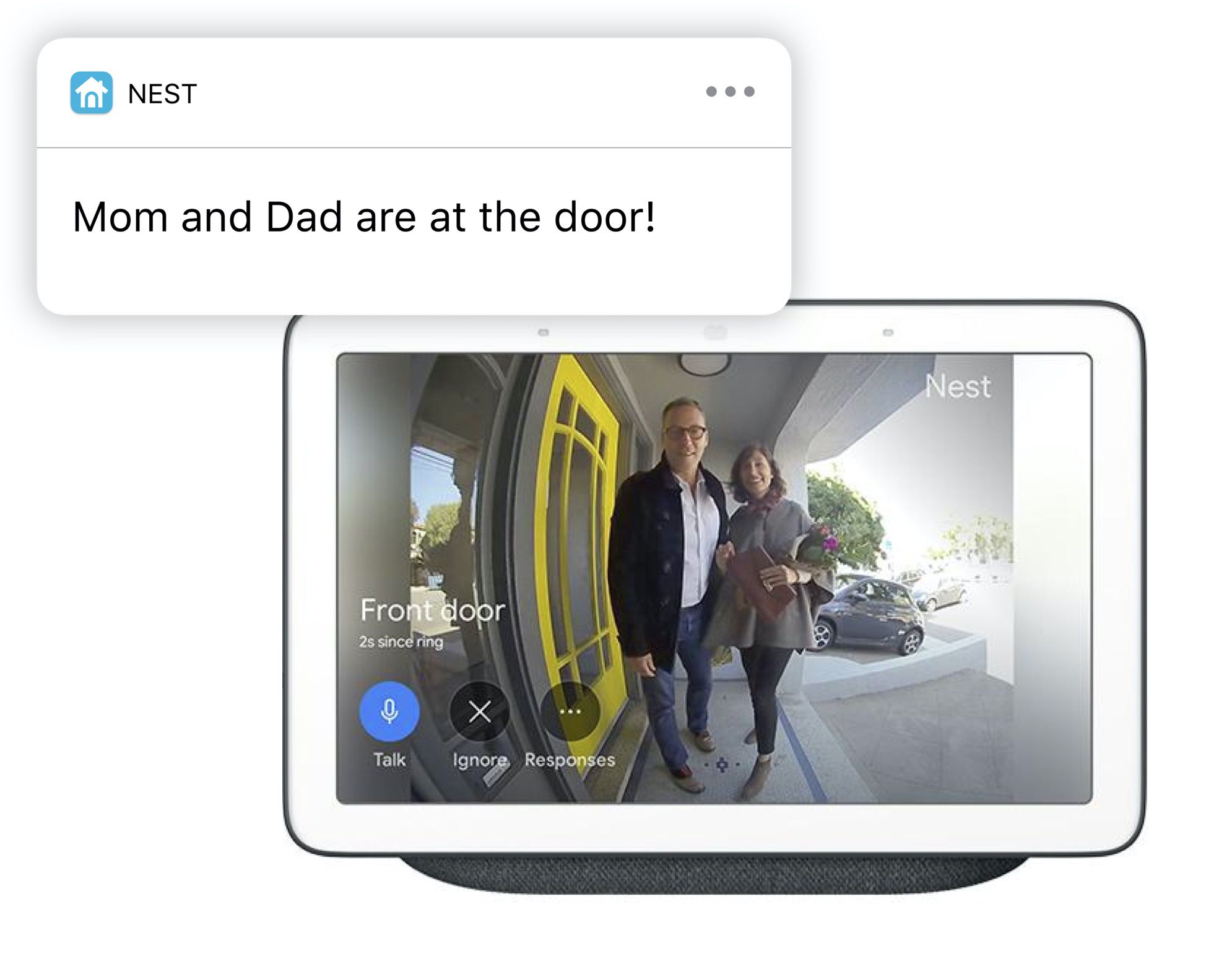 The power of Shared Purpose

Shared Purpose is what keeps everyone headed in the same direction. 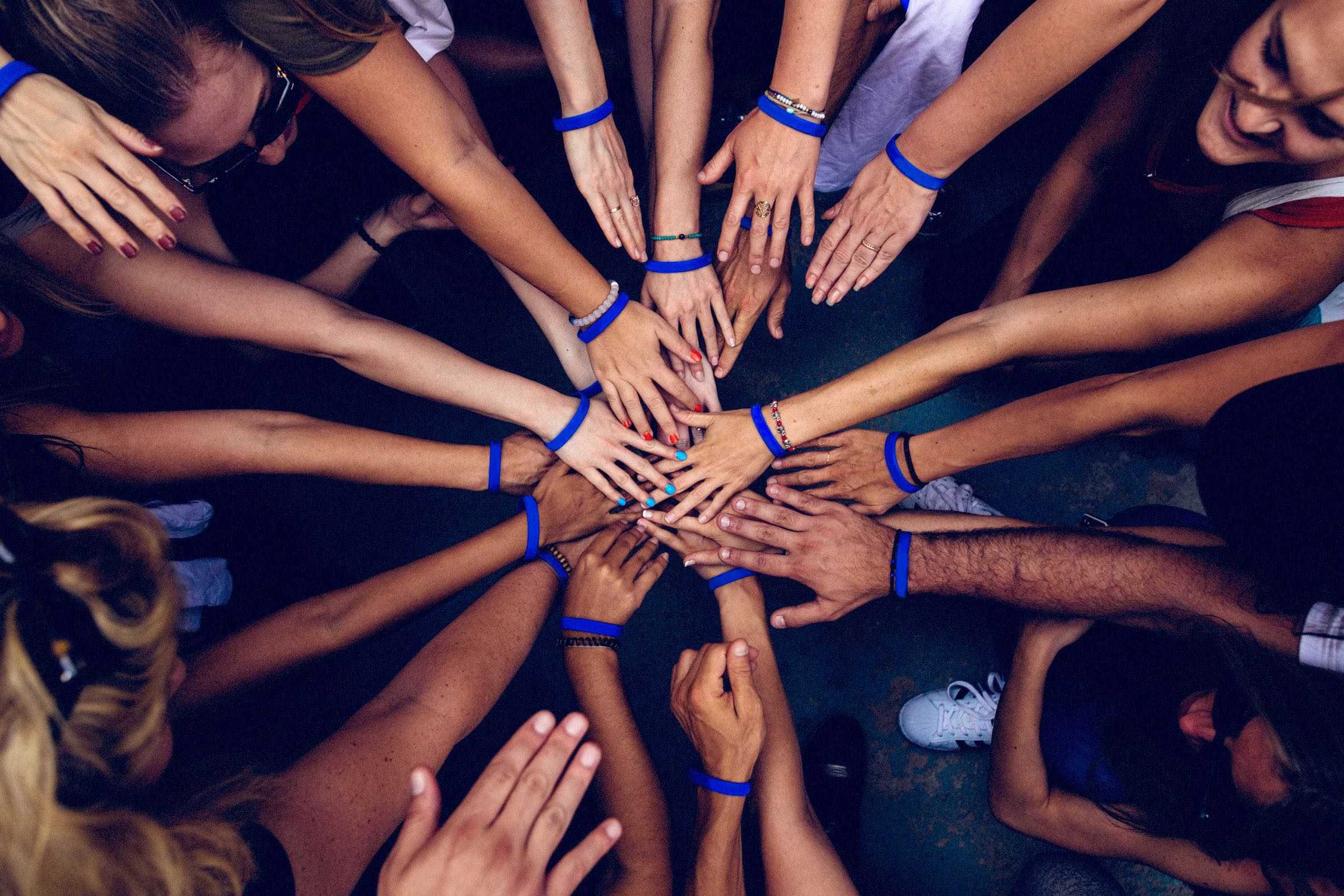 ORBIT generates Brand Gravity around Shared Purpose, which is the larger intention that you and all your stakeholders are working toward together.

It’s not enough to feel good about your purpose. They want it to be their purpose too. Shared Purpose is what your company does with other players, not just what it sells to or does for them.

Shared Purpose shifts the relationship between you and your customers from Producer:Consumer to Co-Creators.

Rural communities in the United States have a tradition of communal building called a "barn raising". When someone needs a new barn or house, they just gather as a community with their skills and tools and make a building together.

People have a natural tendency to look to each other for advice and help. Digital technology has given people the tools to build their own “barns" online, from shared resources to communities of mutual interest.

Wherever your stakeholders are coming together as a community is an opportunity for you to strengthen relationships with and among them.

How do you ‘market’ to a barn raising? By serving the community. Making lunch. Sharpening tools. Lending a hand.

How your brand relates

What types of communication does your brand invest in? What percentage of your total efforts does each type receive?

Think of major communication and customer relationship initiatives, and which types of communication they focus on. Notice where there are opportunities to do more. 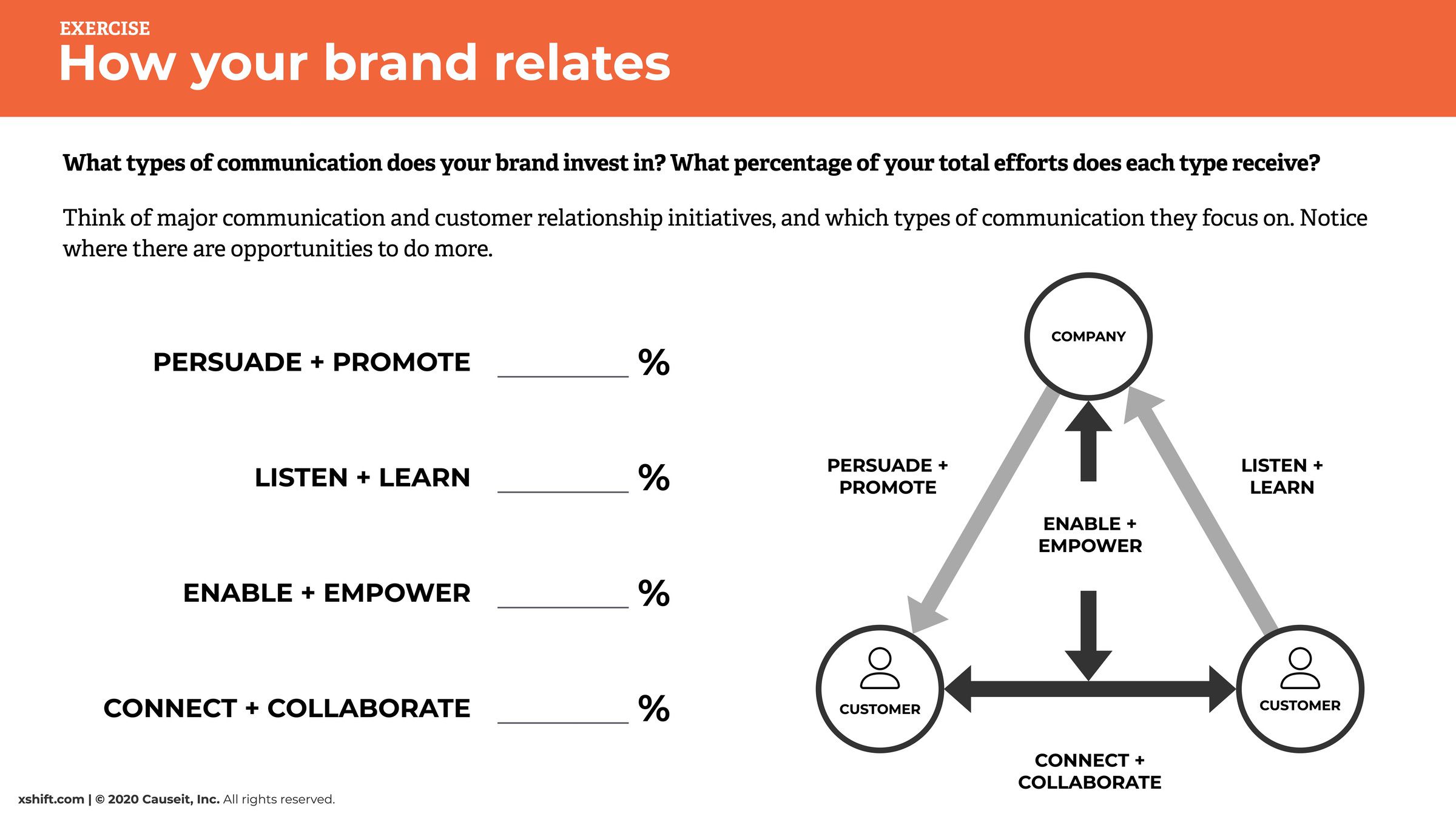 List your company’s key marketing strategies and initiatives. For each, place it on the spectrum from push to pull. Most companies tend to rely more on either push or pull strategies. Where do your company’s strategies fall on that spectrum? 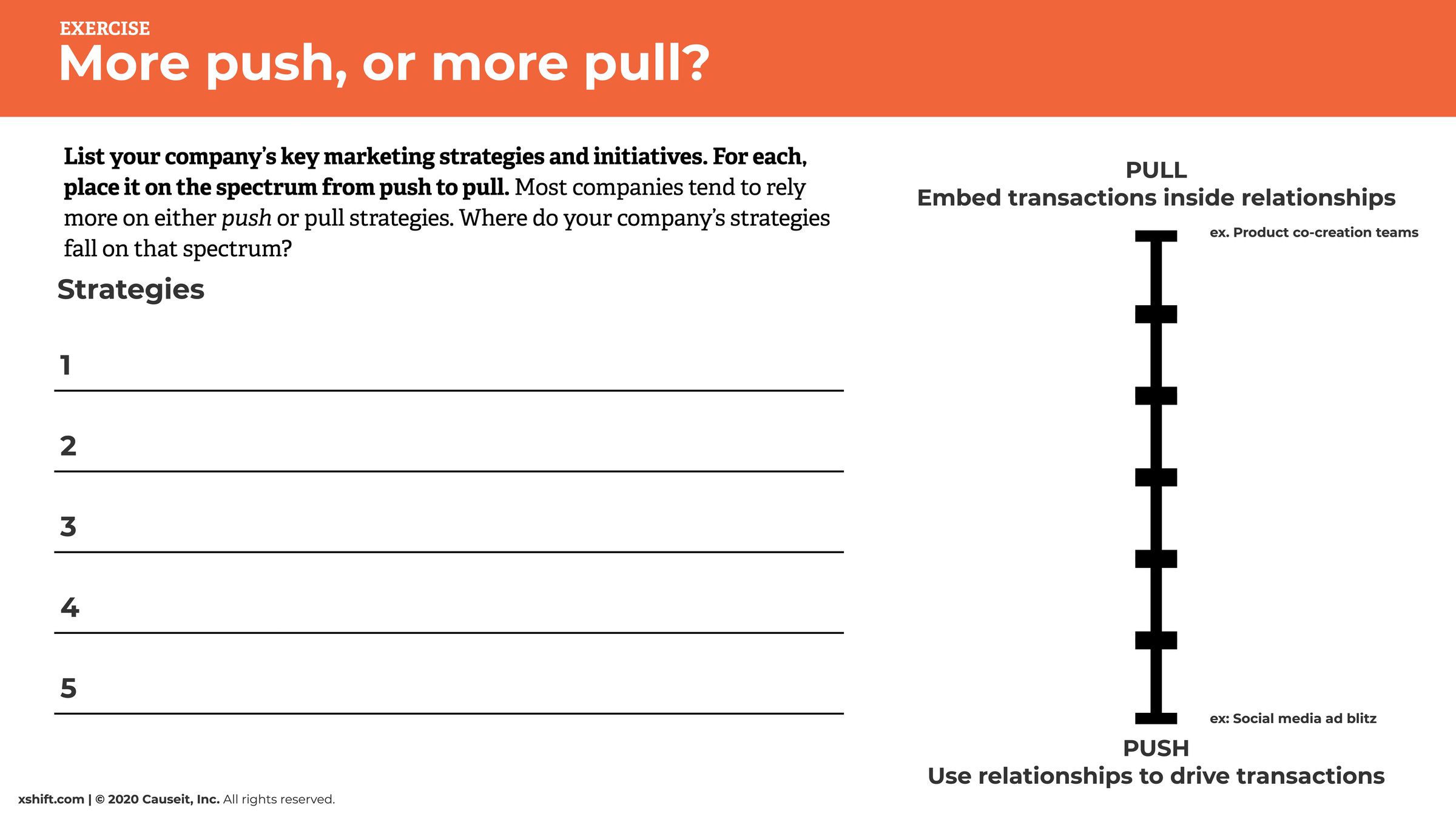 If you've already done the exercises in our Narrative Guidebook, bring over these key elements that connect you with your stakeholders.

What are you creating with y​our stakeholders?

What does everyone contribute to the Shared Purpose?

What is the role relationship between you and your customers? 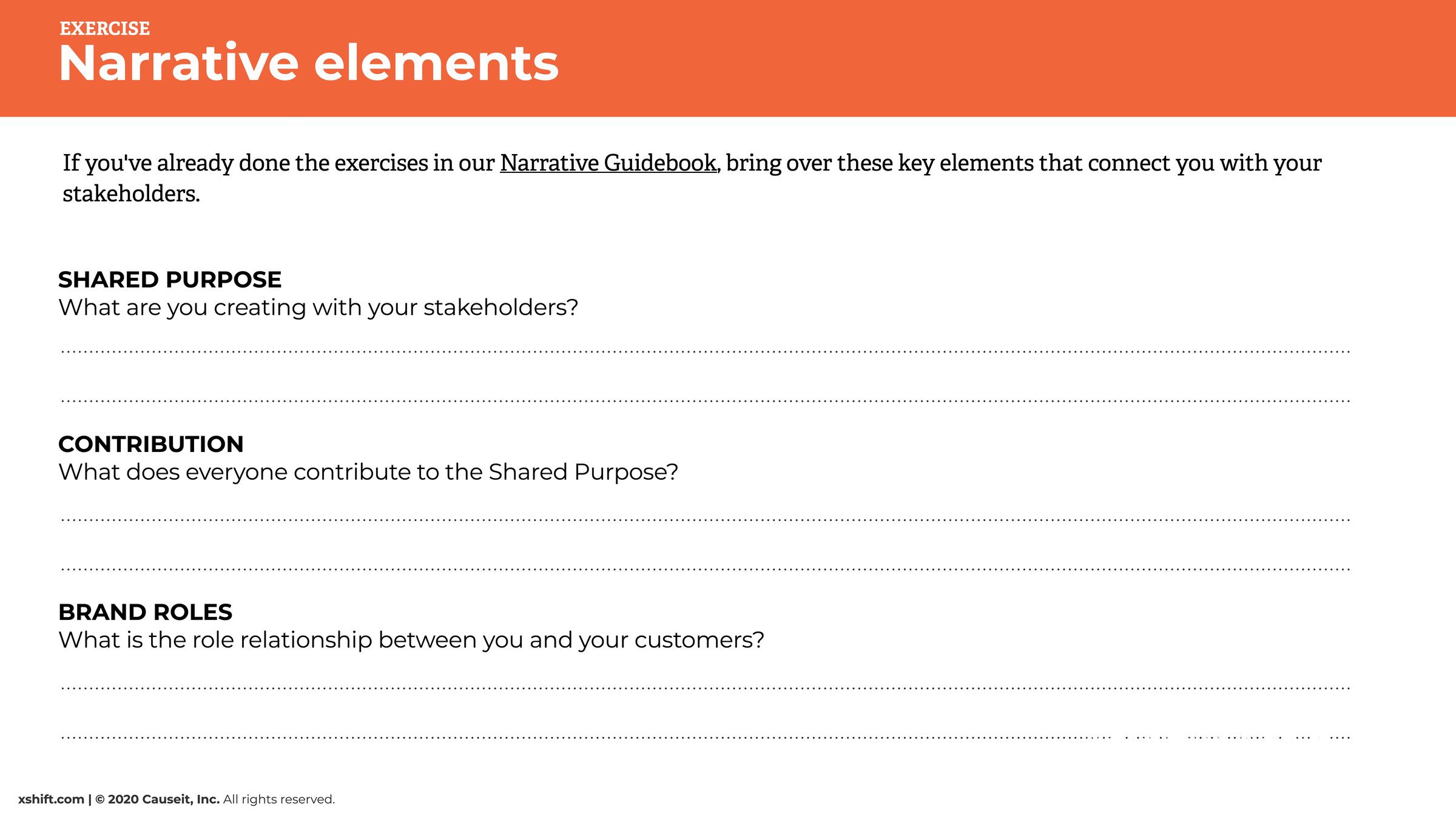 To build engagement in the Digital Age, shift your marketing mindset from push to pull.

"Why Brand Solar Systems are the New Funnel"

Next
How ORBIT Works