Where do audiences need to shift their thinking to understand an innovative offering?

Every innovation requires a new way of thinking. Your Narrative needs to help people make the appropriate shifts in thinking.

Here are three steps to achieve a shift in thinking, or mindshift:

When trying to shift thinking, most of us tend to focus on the second step to persuade people why our way of thinking (or product or company) is is better than others.

But we find that most people on the trapeze get stuck when it comes to the first or third step. They can be convinced your solution is better, but they don’t think they have the problem, or they aren’t ready to make the jump.

Steve Jobs was a master of mindshifts. He knew that his products were so innovative that people didn’t yet have a way of thinking about them.

When he introduced a new product, he didn’t focus on features and benefits. Instead, he gave people a new way to think about the technology. By selling a new mental model, he sold a new solution.

We see this in the first Macintosh commercial in 1984 with its famous “Big Brother” theme. Jobs shifted people’s thinking about computers from what they could do for you to what they said about you. By buying a Macintosh, you were saying something about yourself: that you didn’t conform and could “think different.”

Jobs showed us that the rope was fraying (the existing model of computing was turning us into automatons), there was a new bar (a truly personal computer), and it was within reach (easy to use and better designed).

In 2007, Steve Jobs introduced the iPhone. He began his talk by saying that Apple would be introducing three new products: a touch iPod, a mobile phone and an Internet communicator.

Then he showed how the three products were actually one device: the iPhone. To drive the point home,  he presented a picture of how other companies might have combined these three devices into one—a sharp contrast to Apple’s sleek and elegant product.

In his announcement, Jobs attended carefully to his audience’s existing mental models. If he had just said “Introducing the iPhone!” and showed the product, they wouldn’t have known what to make of it.

So he moved them carefully from the old bar to the new one, making sure to show how the existing bar was now obsolete.

To help people make the leap, describe the new in terms of the old.

As humans, we see the new through the lens of the old. If you have a novel solution, you need to help people make the leap from the old to the new.

When motorcars first came into being around 1900, people had no frame of reference for them. So they became known as horseless carriages.

We’re doing something like that today, when we call self-driving vehicles “driverless cars.” Similar terms include “digital wallets,” “3D printing,” “machine learning” and “bitcoin.” Each modifies something familiar with something unfamiliar.

Use the following to help people make the shift to a new mindset.

Who are you helping to make a shift in mental model? You’ll want to complete these steps for each audience.

2. Identify the domain you’re innovating in

For example, transportation is the domain for horseless carriages.

3. Replace the words in the [brackets] with your terms

‍Today, they think about [domain] as [existing mindset].

Example: Today, they think about transportation as horses.

4. Find the words to reframe that mindset

In the future, they could think about [domain] as [new mindset].

Example: In the future, they could think about transportation as automobiles. 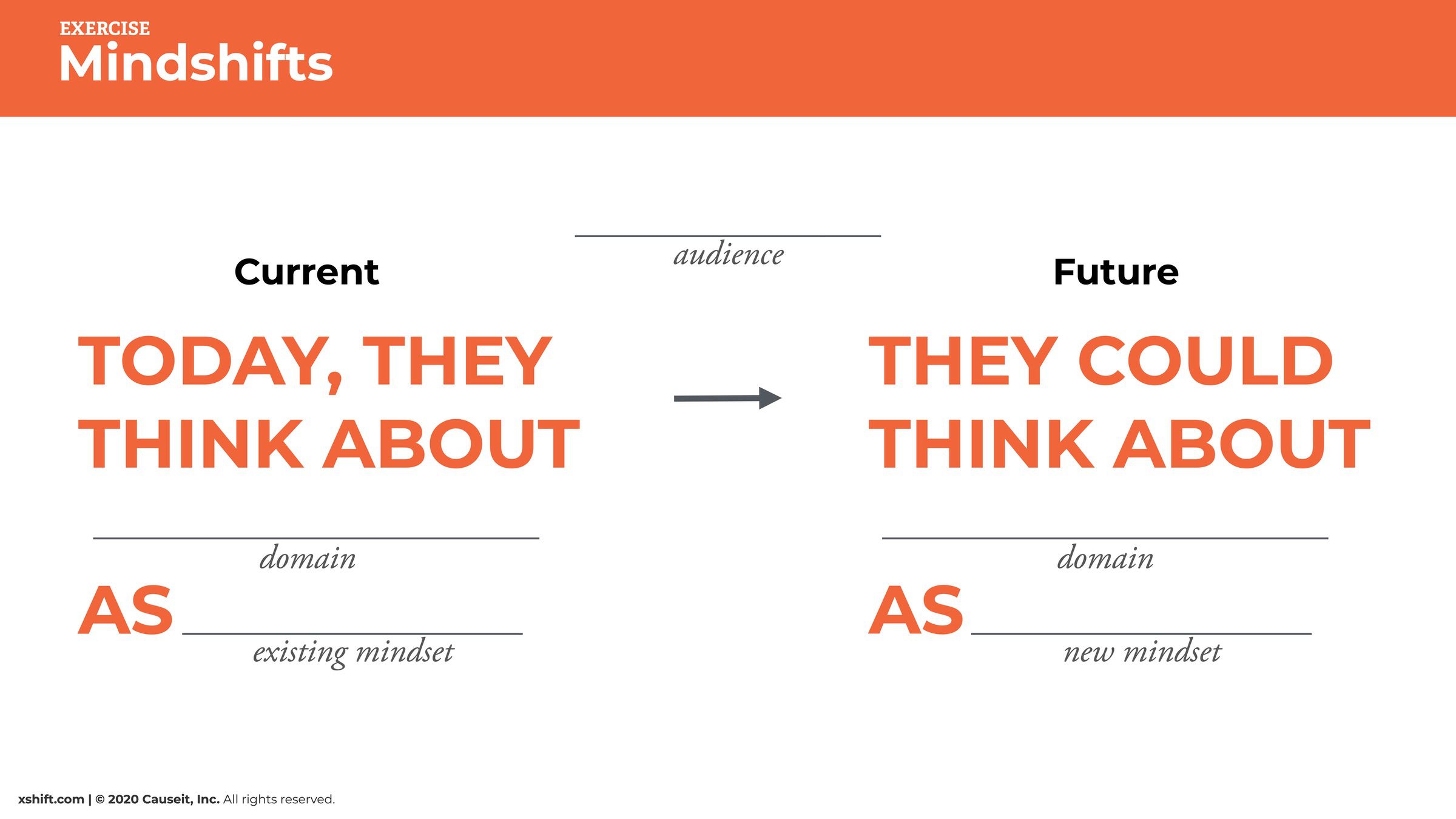 Use the following worksheet to complete the mindshift by helping people think of the new in terms they’re familiar with.

Restate your new concept in terms of the old one. Replace the words in the [brackets] with your terms.

‍A way to think about the future of [domain] through the lens of the past is as [new mindset].

Example: A way to think about the future of transportation through the lens of the past is as a horseless carriage. 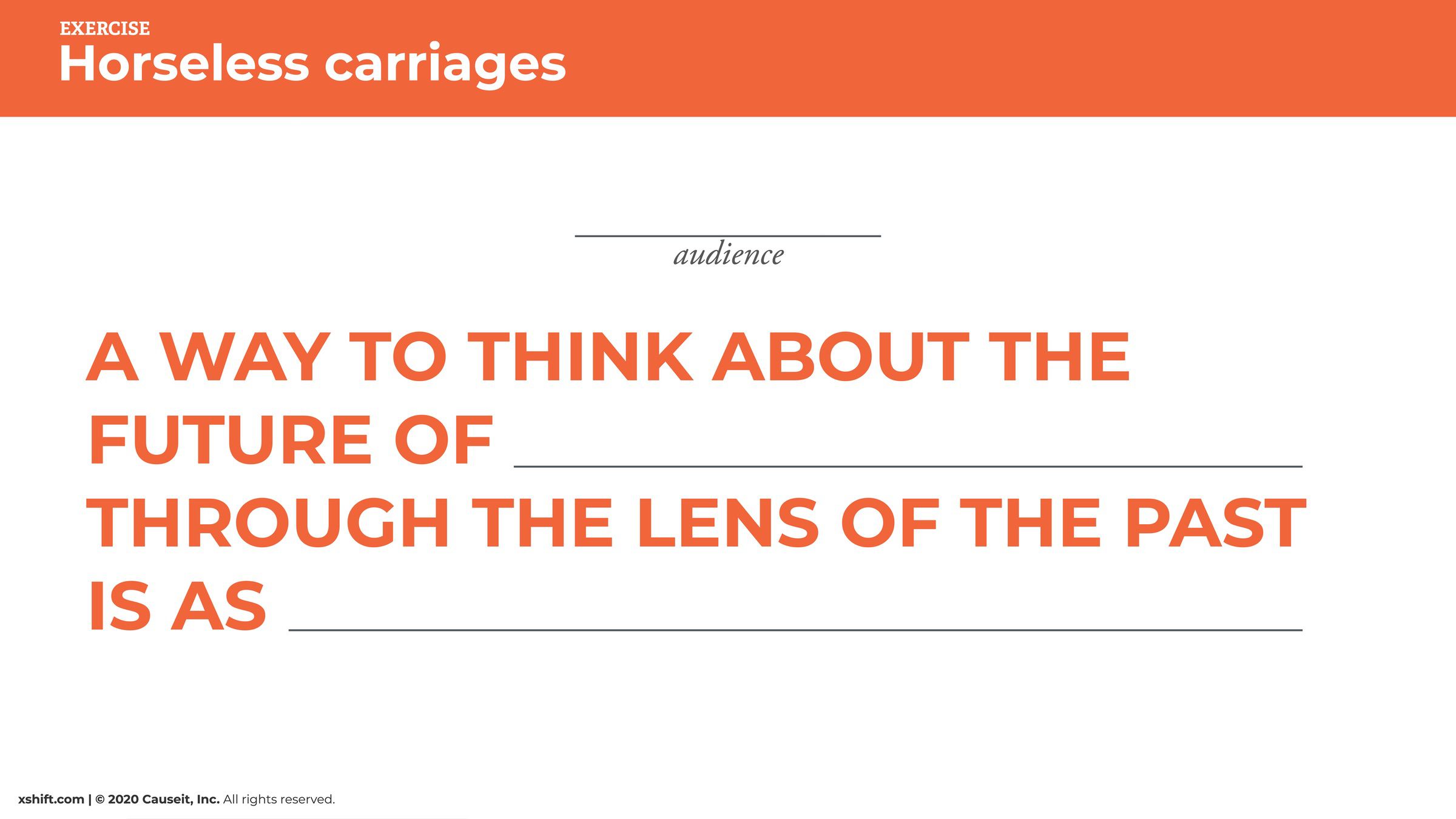 Where do audiences need to shift their thinking to understand an innovative offering?

Previous
Brand Roles
Next
Bring It On