What do you and other members of your community bring to your Shared Purpose?

Your Contribution connects Path to Purpose with your products and services. Discover what you bring to the potluck.

What do you bring to the potluck?

Think of Shared Purpose as a potluck dinner. Contribution is what you and others in your network bring to make the meal complete.

When your story starts with your product, everything is about what you can do for others. It’s like a full-service restaurant. Just show up, enjoy the meal and pay the bill.

But when your Narrative starts with your purpose, things need to be more reciprocal and multi-dimensional. Everyone has something to contribute.

Contribution describes what everyone contributes to the Shared Purpose. It’s like a potluck for purpose.

Everyone knows the Nike slogan: “Just Do It.”

What makes this slogan so powerful is that in three words it captures three different elements: Shared Purpose, Path to Purpose and Contribution to the Potluck.

Their Shared Purpose is “to inspire the athlete in all of us.”

The Path to Purpose is the idea of Winning. Nike is the Greek goddess of Victory, and the swoosh reflects her wings.  Just getting off the couch is a form of winning. So is wearing shoes that feel good when you run and express who you are.

Starbucks’ Contribution follows directly from the concept of third place.

In effect, Starbucks is saying “We’ll provide the coffee, comfortable couches and wi-fi. You provide the conversation, connection and community.”

The potluck explains why Starbucks “Race Together” initiative was a failure.

Starbucks wanted to promote a dialogue about race relations.  The aspiration is consistent with its Shared Purpose “to inspire the human spirit.”

The problem is that the program encouraged people to talk to their barista about the subject. This was inconsistent with the idea of Contribution. It’s not the barista’s job to provide the conversation. Starbucks once again hoarded its purpose.

What Starbucks might have done instead is stayed true to its Path to Purpose of being a third place by inviting others to “wear the T-shirt” of its Shared Purpose.

For example, they could have closed an hour earlier on the first Monday of the month, partnered with organizations expert in holding conversations about race and served free coffee to anyone who joined the conversation.

That way Starbucks would have still made its contribution of coffee and third place—and left the conversation and community to others.

Think about your Shared Purpose as a potluck dinner party. What does everyone need to bring for the party and meal to be complete?

Identifying the other stakeholders and what they each bring to the party helps you see the entire system of what it takes to fulfill your purpose. 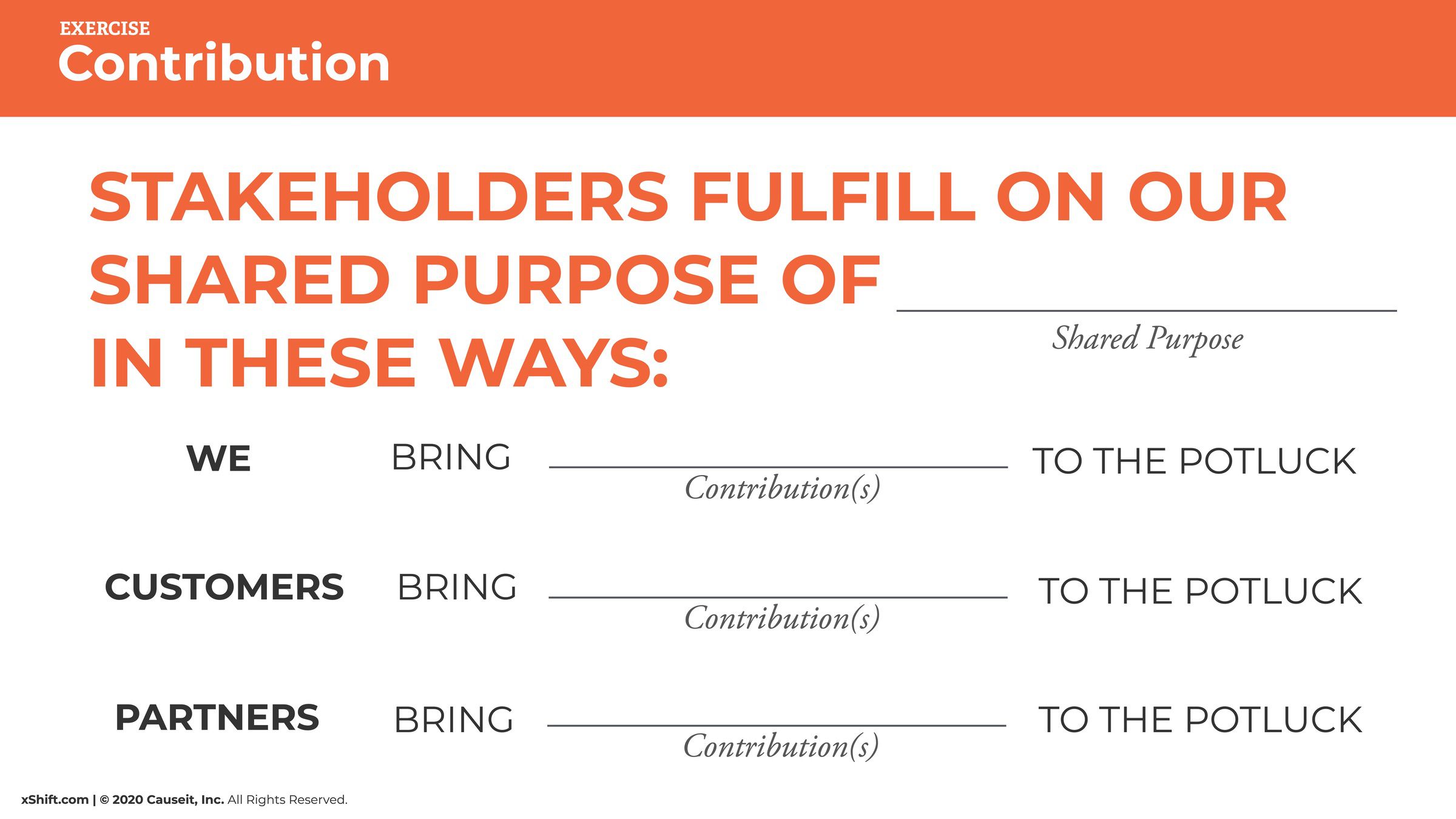 What do you and other members of your community bring to your Shared Purpose?