What’s the thread that ties together your past and future and makes you unique?

What is it that you have always been and always will be? The more you figure out what stays the same, the better you will be able to adapt as things change around you.

The source of your authenticity

Company DNA is who you are, who you've always been and what you inspire in others.

In the The Human Brand, Chris Malone and Susan Fiske show that humans use the same part of our brains to evaluate brands as we do people.

So as a company, you have to act like a person. It’s hard to trust someone if you don’t think they want what’s best for you. That’s why Shared Purpose is so important.

It’s also hard to trust someone if you don’t understand where they came from and what they will do next. This is why a good Narrative has a through line that connects the past with the future.

Company DNA is the element of Narrative that defines this thread. It is the source of your authenticity, as it comes from who you are rather than what you say.

Like human DNA, your Company DNA was formed at conception and does not change over its lifetime. But it's not completely fixed. Like human DNA, it can be expressed in different ways.

Your DNA lies at the root of the value you provide, because it's not just who you are—it’s what you naturally inspire in others.

“We perceive and judge corporations as if they are people, even if we never have any direct contact with the people in them.”
‍— Chris Malone, The Human Brand

Comparing IBM with HP reveals what happens when a company abandons its DNA, and how Company DNA applies to B2B companies.

Tom Watson was the founder of IBM. On his desk was a sign that said THINK. It reflected his belief that IBM should make machines that helped people think, and use thinking to build better machines.

Over the years, this DNA of “thinking machines” has expressed itself in many ways, from the ThinkPad laptop, to the Smarter Planet initiative, to Watson, the artificial intelligence engine of today.

In contrast, Bill Hewlett and Dave Packard founded the company in a one-car garage in Palo Alto in 1939. As they grew, the founders sought to maintain the spirit of entrepreneurship on a larger scale.

This became the “HP Way,” one of the first examples of empowering employees, decentralizing the organization and tying pay to performance.

But in the 1990s, HP repudiated the HP Way, even as the rest of Silicon Valley embraced these same principles. Today, HP has been split into three separate companies without a clear identity or purpose. 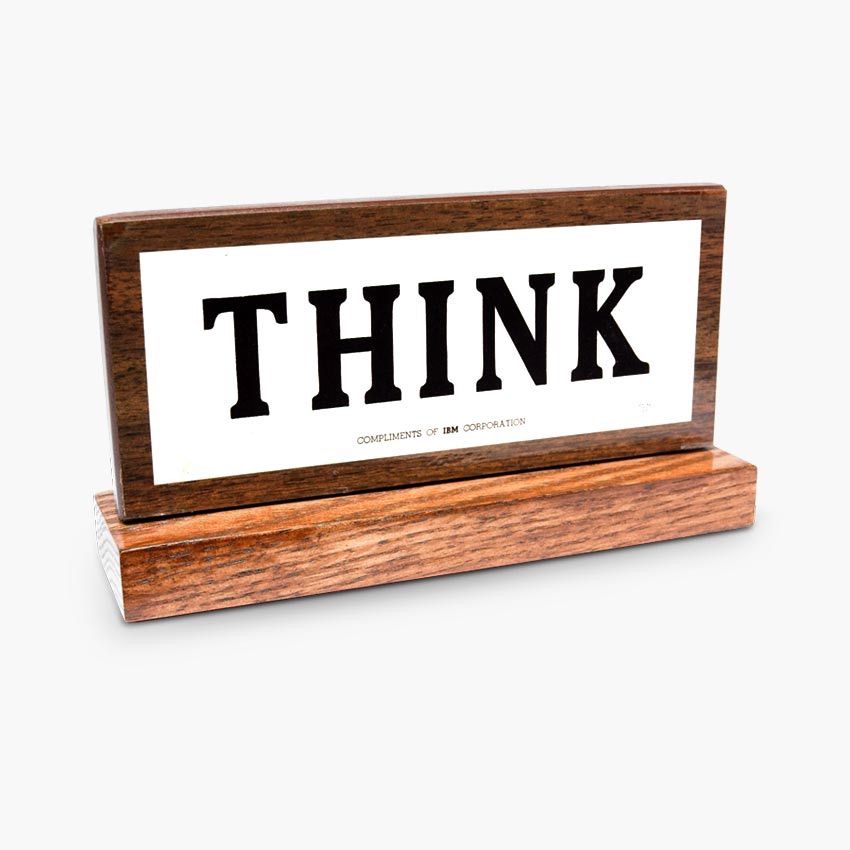 The Pokemon DNA of “collecting creatures” came to life in the outdoors, where it was first conceived.

Consider the story of Satoshi Tajiri, a boy growing up outside Tokyo. He loved collecting insects so much the other children called him “Dr. Bug.” But as urban expansion replaced the fields and forests, Satoshi’s insects disappeared.

Satoshi grew up and developed an interest in games. He saw a way to recreate his childhood experience of collecting magical, elusive creatures. He did this with trading cards and video games. Eventually his vision came to smartphones as the game Pokemon Go.

Pokemon Go became the most popular mobile game in history. In 2016, millions of people gathered in public spaces trying to “catch” Pokemon characters with their phones.

Prevention is part of this health company’s DNA.

Kaiser Permanente was founded in the Great Depression to serve thousands of workers building the Colorado River Aqueduct Project.

The managers wanted to keep workers healthy, not just treat them when they got sick.

Today Kaiser is the market leader in accountable care because their DNA is about good health through prevention rather than treatment of disease.

A world without your business

To get a sense of the impact your company DNA has had on the world, imagine that your business disappeared. All of your customers are now served by competitors. Apart from the loss for your employees and investors, why is the world worse off without you?

Use this worksheet to record your thoughts. 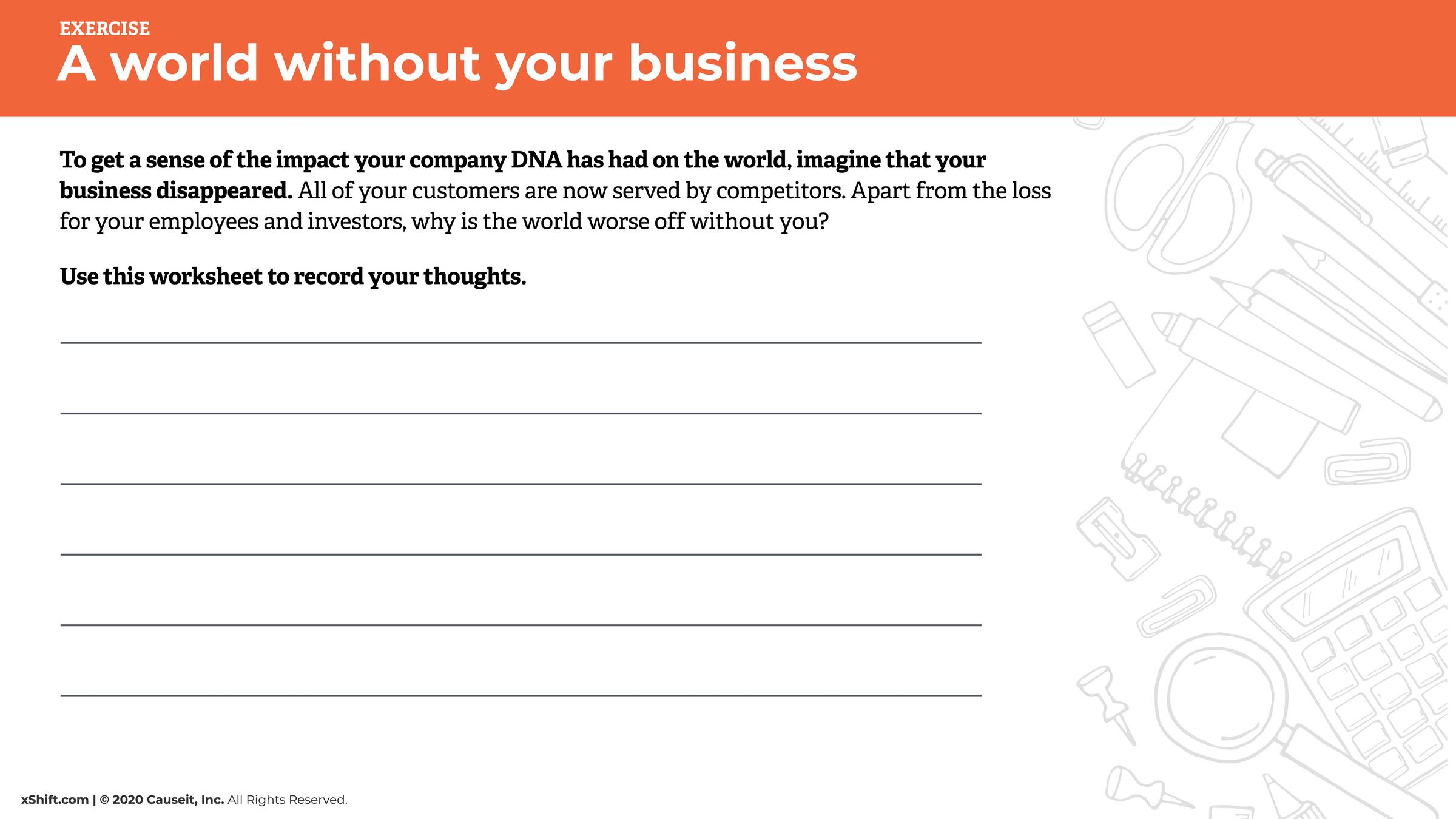 To find your Company DNA, go back in your company history and look at what problems your founders were initially out to solve. Don't get hung up on the product or business model they used. Look at the fundamental need, activity or desire they were addressing.

Second, look into your company culture. What stories do people tell about the origins of the company? Pay particular attention to what you tell new employees.

For example, at Staples every employee hears about how founder Tom Stemberg ran out of  typewriter ribbon on a holiday weekend, couldn't find an open stationery store—and came up with the idea for the company. This story reveals a key element of Staples’ DNA: “keeping people in the flow of work.”

Third, look at the most successful products and businesses across the history of the company. What's the common thread that connects them together? What problem were they solving? What capability or expertise did they employ? What objective were they trying to achieve?

Use the worksheet to capture ideas for your Company DNA. 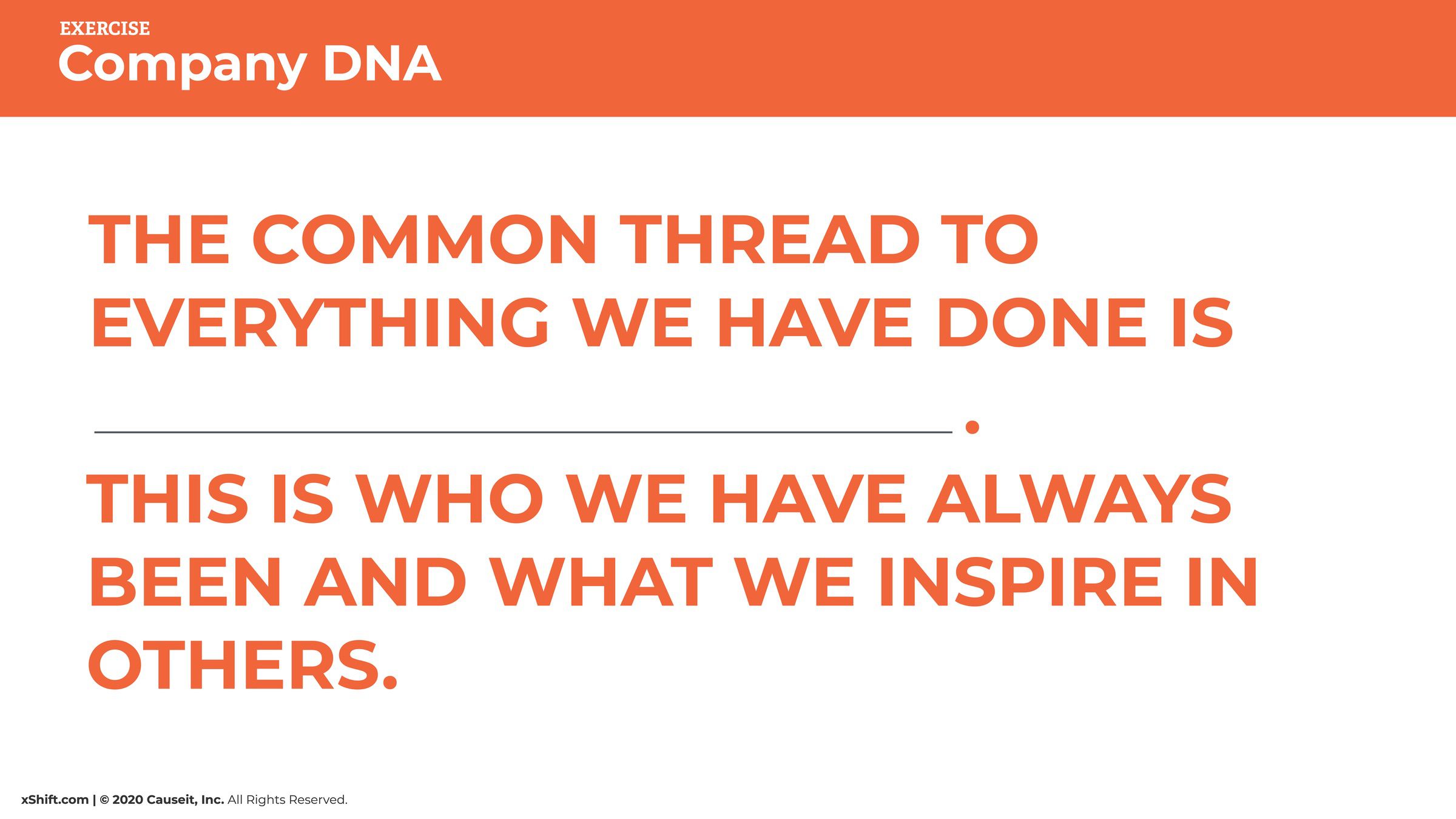 What’s the thread that ties together your past and future and makes you unique?